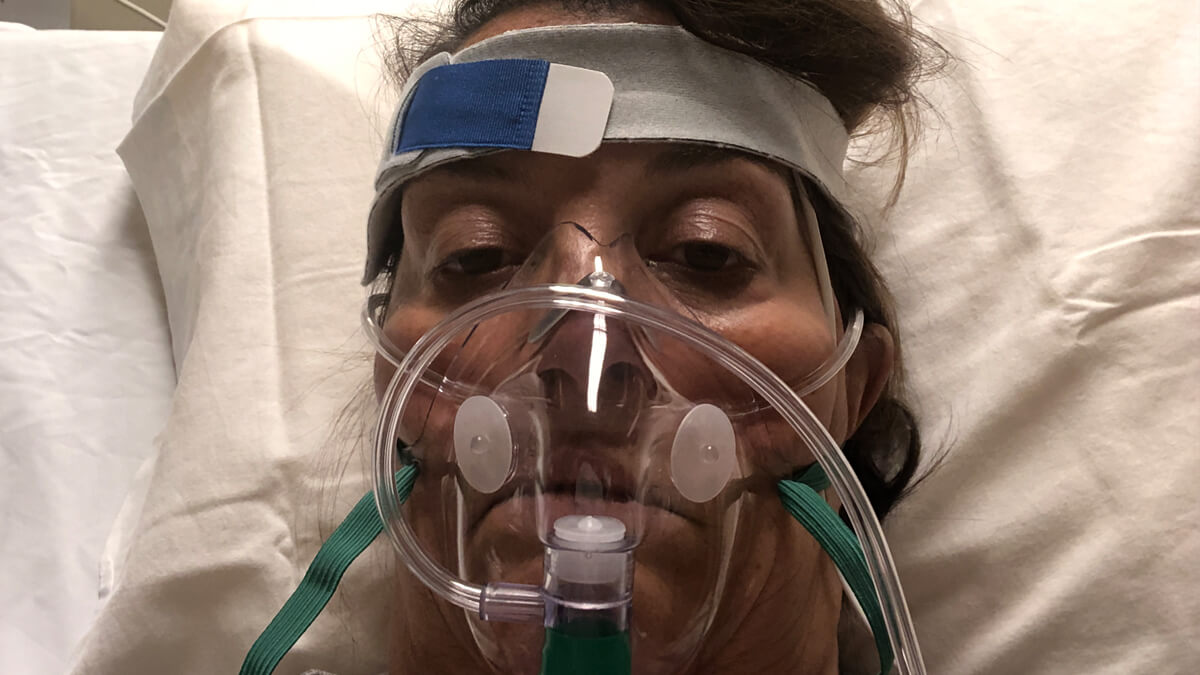 When Mandy Powell and I started our telephone interview, she paused to inform me that her vocal cords have been damaged by illness, and her voice is now lower and raspier. Right away I was intrigued — but, as it turned out, her voice is the least of her story. Mandy’s health journey is a remarkable one, filled with highs, lows and support from the unlikeliest places, all resulting in triumph over one of the modern age’s scariest illnesses: COVID-19.

Mandy, 54 years old, said she was never “a sickly person.” She rarely had colds, flu or strep throat, and she certainly was not expecting the novel coronavirus to hit her the way it did. When she started having chest pains in June of 2020, doctors diagnosed a case of pleurisy and gave her antibiotics and a steroid. For a while, she felt OK — then she started having severe migraines, back pain and fatigue, and her chest started hurting to the point that “it felt like stabbing ice picks.” Finally, when her fever spiked to 102, Mandy’s daughter, Lillie, took her to the emergency room at St. Francis in Greenville. At this point, Mandy figured she had COVID. She anticipated a quick ER trip followed by a quarantine – certainly not to remain in the hospital until Aug. 27.

“I have no memory of being admitted that first night,” she shared. “My oxygen dipped to 30, and I was crazily combative – like a wildcat, they said. But it wasn’t my fault – my oxygen was practically at nothing.”

The next morning, Mandy was moved to the critical care unit and placed on a ventilator; just a few doors down was her father, who also was hospitalized with COVID-19. Sadly, her father would not survive the virus, and Mandy’s own survival seemed unlikely at first; she spent eight-and-a-half weeks on the ventilator, a timeline many patients cannot abide. During her first month, Mandy remained in a coma, yet she recalls some of the peculiar dreams.

“My coma dreams were crazy,” she said. “They were so vivid — but I know I was not in China, eating at Chick-fil-A.”

She even felt like she had a guardian angel: Sally, a mysterious and calming presence who was not a doctor or nurse but comforted Mandy and even appeared in the coma dreams.

“Sally was with me almost every single day. I knew she was not a nurse because she never worked on me or gave me medicine,” she explained. “She was petite with olive skin and gorgeous eyes. She held my hand and washed my face and said, ‘Mandy, you’re doing great.’ No one else could see her, but everyone agreed she existed because she put my hair in braids.”

When Mandy finally woke from her coma, she could not speak or move. To top it off, she was without any visits from her daughter or husband due to COVID restrictions, which she described as “horrendous.” There is no doubt in Mandy’s mind that her compassionate care team kept her alive during those weeks.

“I had double pneumonia, other infections, blood clots in my leg – every complication known to man,” she said. “I also had to learn to write and walk again. One day, my ventilator was hurting, and I motioned with my hands to tell the nurse. I could not draw a line or write an ‘I’ with my hand because I lost too much muscle mass. It was like I was paralyzed.”

The road to recovery had just begun for Mandy and would prove to be quite long. She credited a number of people as instrumental in her survival — Lori Weinstein and Brandon Sprogis, both pulmonary critical care nurses; Dr. Julia G. Payne, her physician in the critical care unit; and Michelle Hawkins, a respiratory therapist, among many others.

“Mandy was our patient during the busiest time of COVID that we had at the hospital,” Hawkins recalled. “We are similar in age, and I thought to myself: This could be me lying here. We connected immediately, and I told her she had to keep fighting.”

The doctors and nurses kept Mandy encouraged with the promise of visits from her family. Because she wanted nothing more than to see her husband and her daughter, Mandy’s willpower helped her wean herself from the ventilator. On July 31, she was rewarded with a visit from her husband, Jeff, followed by a visit from her daughter on Aug. 2.

Sadly, Mandy’s father had already passed away by this time. The medical staff had kept this information from her, fearing grief would jeopardize her recovery, but, when Mandy bluntly asked her husband, she learned the truth.

“After [Jeff and I] held hands and cried, I immediately asked how my daddy was. No one was happy that I found out that way, but it wasn’t Jeff’s fault. My dad had died on July 4, and he did not get the funeral he deserved. But I did do a birthday parade for him this past May, and it went on for miles,” she said, tears in her voice.

Medical staff expected Mandy’s rehabilitation sessions to last about six weeks, but Mandy learned to write, talk and move again in just two-and-a-half weeks, thanks to her caring therapists on the ninth floor, whom she called “angels on Earth.”

“I worked really hard,” she admitted. “I didn’t want to stay the whole six weeks.”

When she finally departed the hospital on Aug. 27 – more than two months after the night her oxygen levels approached a lethal level – she was greeted with a fanfare of close friends and extended family.

“People were outside waiting for me with balloons and banners,” she beamed. “It was nothing short of amazing seeing my family, siblings, friends and everyone.”

“I’ve experienced some heartfelt stories – I’ve had a groom die; I’ve had a bride and groom both get called to duty – just a lot of wedding stories,” she said. “But after I went through COVID, I reached out to my friend who’s a media anchor in Miami. She told me I also need to write about my survival.”