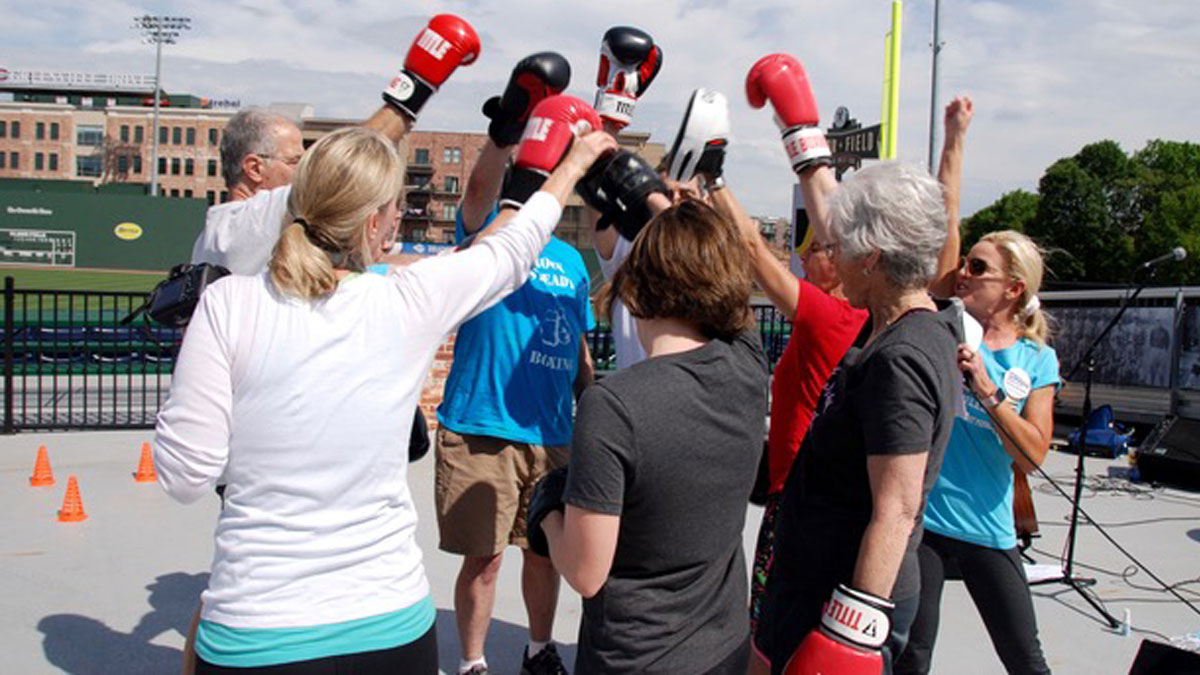 It’s hard to find something positive to say about the COVID-19 pandemic, but, for the Greenville Area Parkinson Society, there has been somewhat of an upside.

Executive Director Laryn Weaver leads a small team of three other staffers who work to provide support and improve the lives of people with Parkinson’s, their caregivers and families. In the Upstate, that’s 1,500 members among roughly 12,000 living with the disease in the Upstate.

Most of the organization’s efforts are hands-on, biweekly support groups for victims of the disease and their caregivers, a monthly educational series that pre-COVID often drew nearly 200 participants and weekly exercise programs.

Rather than look at what they couldn’t do during COVID, Weaver focused on the positive – “what good can come out of it.” And she challenged herself and her team to think of “how do we use this as an opportunity to be better?”

One of the most rewarding initiatives was the least technical: Member Relations Coordinator Robin Kucinic organized a team of 10 to 15 volunteers who call every household every other month to see how they are doing and determine their needs. Virtual meetings and emails are fine as far as they go, but the leaders at the Greenville Area Parkinson Society knew you couldn’t rely on them to let you know how people were feeling.

The calls have “really personalized our connection with members,” Weaver said, adding, “It’s one of the most rewarding things we’ve done.” And it’s been productive. As a result of those calls, GAPS realized there was a need for a bereavement support group.

The phone calls, though only analog, have been a great idea, but the delivery mechanism for the support groups and other sessions is wholly digital – conducted as virtual meetings. GAPS likes to cap support group attendance at 10 to 15 people so everyone can actively participate. But in implementing the meetings, a bigger issue was revealed: the digital divide.

To help bridge that gap, GAPS wrote and received a $25,000 “Healthy Greenville” grant from the Greenville Health Authority that will build a lending library of sorts, with about 30 iPads and a tech expert to set them up and teach each Parkinson’s patient how to use them.

The idea is to “open up a whole new world of engagement” to members, expand their access to programming by letting them borrow devices and get comfortable with new technology. Weaver believes a lot more members will be interested in borrowing an iPad than the 30 initially proposed, but she hopes that once they reach a comfort level with using them, many members will purchase their own.

The iPads will do a lot more than connect members to GAPS programming.

“We want them to be living their best quality of life,” Weaver said, “and that means seeing their family members and their grandkids. That’s mission-minded for us as well.”

A big part of treatment for Parkinson’s disease is exercise, which, while not a cure, can reduce or reverse symptoms. Programs are accessible to members either directly from GAPS or from partners in the Upstate. Programs have been delivered virtually since the onset of the pandemic. For example, a program through Rock Steady Boxing in Greenville combines brain work, foot work and body movement – three keys to improving daily life for Parkinson’s patients. GAPS in Motion is the organization’s own program that is now accessible to members online. All exercise programs key on balance, movement and control.

Although the virtual programs have come about as an emergency measure, Weaver believes they are onto something.

“Something like this (COVID) forces us to re-evaluate,” she said, adding that GAPS has discovered they can reach and engage people who for any number of reasons can’t attend a program and that they can deliver programs to more people when they aren’t confined by space and time. “We’re going to be a hybrid. There will be elements of virtual programming even when we go back to live.”

And that, she believes, is going to “make us even better.”

Alexander Tressor is a Broadway dancer and ballet instructor who was diagnosed with Parkinson’s disease in 2007. Looking for a way to manage his disease, Tressor designed a diet and exercise program called PD On The Move. In 2016 and 2017, he came to Greenville as the choreographer in residence for the International Ballet. He became engaged with GAPS and helped the organization create its signature exercise program – GAPS In Motion. Today, he lives in Boston with his wife and 2-year-old daughter. As Weaver acknowledged: “Talk about living well with PD!”