Few realize the clear connection that exists between heart and head health, but clinical studies over the past decade are providing more evidence to support this connection.

“The medical world is on the precipice of the research,” asserted Elizabeth Hubbard, the social and wellness director at Wellmore, a luxury assisted living and memory care facility on Daniel Island. Hubbard understands the importance of these findings as she sees residents daily afflicted.

Cognitive impairment is highly prevalent in the elderly, and two major types, Alzheimer’s disease and vascular dementia, account for a large part of the burden of disability and of the use of health care resources.

“Age, genetics, diet, lifestyle, environment and head trauma can all account for these chronic conditions,” Hubbard continued, “but some of these factors can be prevented.”

Because a healthy heart is equivalent to a healthy brain, physical activity is a key means of prevention. Physical activity fosters less buildup of plaque in the arteries, resulting in low blood pressure, which in turn allows healthy blood to flow actively to the brain. Hubbard expounded that when there is a “lack of blood carrying good oxygen to the brain, there are also less nutrients, which eventually can cloud reasoning, memory and judgment.”

She also pridefully described the memory care unit at Wellmore, which targets individuals suffering from dementia with purposeful programming. The benefits of physical activity specifically encouraging heart health are undeniable.

One example of this in action is in Wellmore’s national award-winning wellness program called WAVES, an aquatic therapy program that gets residents moving while reducing agitation and stress, increasing strength and improving balance.

“We find this type of programming helps engage our participants and can bring them back into some lucidity,” Hubbard said.

Past studies support what she and her colleagues at Wellmore are seeing firsthand. The National Institutes of Health, as an example, highlighted a Johns Hopkins University research team which studied nearly 16,000 middle-aged people with the aim to explore the effect of vascular risk factors.

More than 1,500 of the participants were eventually diagnosed with dementia over the time span, and, according to NIH, “the analysis confirmed prior findings that those with vascular risk factors in midlife, such as diabetes or hypertension, had a greater chance of developing dementia as they aged.”

Furthermore, smoking cigarettes was another clear indicator for risk, as well as those with prehypertension, in which blood pressure levels are higher than normal.

Even more interesting is data from testing the benefits of antihypertensive medications aimed at lowering blood pressure. Data published by the National Center for Biotechnology Information from a 12-year study in Utah demonstrated that the use of antihypertensives at baseline was associated with lower incidence of Alzheimer’s. These indicators are promising, but further research is still needed to draw final conclusions.

Good heart health and, consequently, head health, are things that we should all strive toward to create the best and most healthy future for ourselves. The action steps to take are neither complicated nor groundbreaking, beginning with diet and exercise to prevent any chronic conditions. Hubbard emphasized a diet that is low in fat and sodium and high in fruits and vegetables and even described the likely benefits of a Mediterranean diet to encourage brain health, which includes hardly any red meat, substantial whole grains and lots of fruits and veggies.

Furthermore, the Centers for Disease Control and Prevention supports Hubbard’s views and even encourages patients to get diabetes under control because it causes high blood sugar, which can damage blood vessels and nerves. This damage, unsurprisingly, raises the risk for heart disease, stroke and dementia.

Finally, for those concerned with family history of cognitive diseases, it is important to keep in mind that early prevention and treatment can potentially mitigate the onset of dementia. Hubbard summed up the general consensus fairly well: “Live a healthy, active lifestyle, with as much daily movement as possible.” 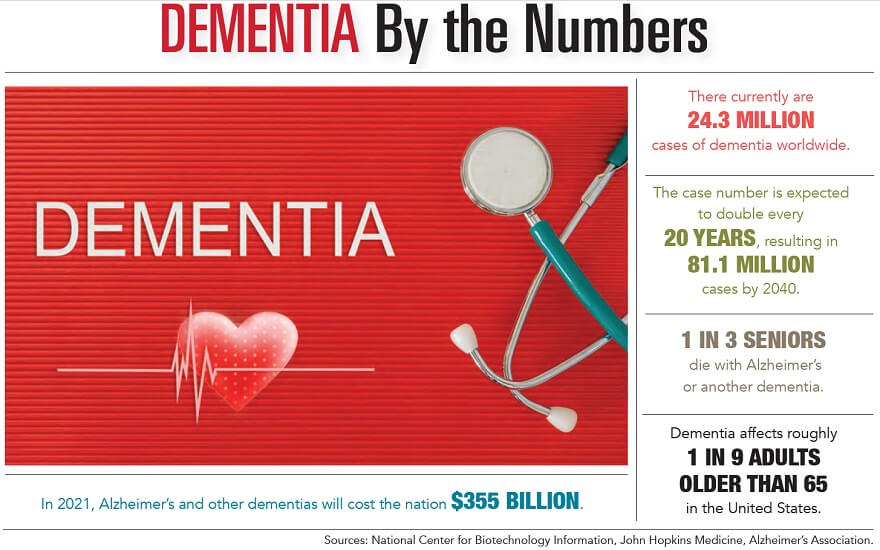