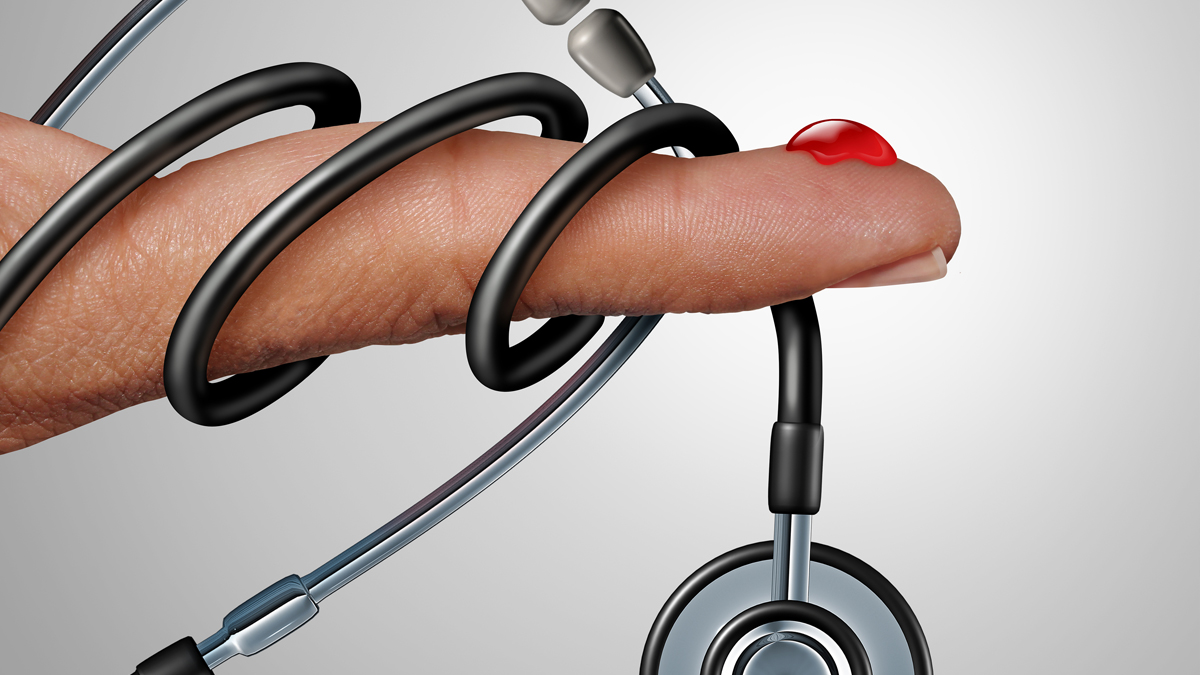 Type 2 diabetes is a serious disease caused by an excess of sugar in the blood because the body is unable to make or efficiently use insulin, a hormone created by the pancreas that helps turn glucose from food into energy. Left uncontrolled, diabetes can damage the eyes, limbs and kidneys and even contribute to heart attacks and strokes.

But what about prediabetes? Once you are diagnosed with this condition, is there anything you can do to alter the dire consequences that might await you? Can you alter the course of the disease? Is it possible that changes in your diet and lifestyle might put you back on the path to a longer and healthier life?

The answer is yes, according to Dr. Elizabeth Bond, who is with Carolina Endocrine Associates in North Charleston.

“Once you are diagnosed with prediabetes, the goal is to delay the onset of diabetes or prevent it entirely. We can do that by intensive lifestyle implementation,” she explained, pointing out that changing the way you eat is vital if you hope to avoid a diagnosis of diabetes.

That means a diet consisting of lean proteins and fish, as well as fresh fruits and vegetables and limiting simple carbohydrates such as white rice, white potatoes, snack foods, ice cream, cookies and cakes. Dr. Bond said eliminating sugary drinks such as soda, fruit juice and sweet tea is extremely important as well.

“It’s real simple,” he said. “You lose weight, exercise and eliminate processed sugars. The first step is to get sugar out of your drinks. Getting rid of soda, juice, Kool-Aid and sweet tea gets some people back to normal. Fruit juice is the same as drinking a Coke. Eat the fruit; don’t drink the juice.”

He added that exercise also is important, both aerobic – walking and running – and resistance – lifting weights.

“That increases muscle mass, and the more muscle you have, the more sugar gets burnt,” he said.

Another option would be to take metformin, a drug used to control high blood sugar. However, Dr. Bond cited a study published in 2002 that compared the effectiveness of lifestyle changes to that of taking medication.

“They found that lifestyle intervention was superior to metformin in reducing the incidence of diabetes,” Dr. Bond said.

She pointed out that there are three different tests to determine if a person has diabetes. One looks at blood sugar level, while another, hemoglobin A1C, shows the average blood sugar of the previous three months. The third is an oral glucose tolerance test where the patient is given a set amount of sugar, then his or her blood sugar is measured two hours later.

Dr. Cotter pointed out that the phenomenon of aging pushes a person toward diabetes.

“It’s often said that if you live long enough, you will become diabetic,” he said.

He added, however, that he often sees prediabetes in children, mainly since they are overweight, a result of what they eat and drink and because they don’t get enough exercise.

Both Dr. Bond and Dr. Cotter agreed that early diagnosis is important if patients with prediabetes, both young and old, are to avoid the effects of type 2 diabetes. Dr. Bond said screening is indicated for patients with symptoms that include increased thirst, increased urination, unexplained weight loss or blurry vision. She added that people with major risk factors, such as a family history of diabetes, being overweight or having high cholesterol or high blood pressure, should be screened regularly, along with people of certain ethnicities, such as African Americans, Asians and Native Americans. Testing for diabetes is recommended for everyone over the age of 45 as well.

According to Dr. Bond, even senior citizens should be concerned if they are diagnosed with prediabetes.

“They should attempt to change their lifestyle as best they can,” she said. “If they have conditions that prohibit exercise, such as arthritis, they should try to maintain a normal weight and stay as active as possible. If they have high blood pressure or high cholesterol, they should be managing those problems with their physician to improve their overall health.”

The Effects of Diabetes

It’s never good news to be hit with a diagnosis of diabetes. Left uncontrolled, it can cause serious damage to your eyes, limbs and kidneys and lead to heart attacks and strokes. But even if you are diabetic, there are steps you can take to protect yourself from the potentially significant adverse effects the disease can have on your body.

For example, a few main concerns for diabetics are ulcers, wounds, cuts, scrapes, sores and blisters. These are all limb-threatening, especially if they become infected, according to Dr. Jill C. Blau of Island Podiatry in Beaufort. She added that decreased blood flow to the feet or toes, a result of poor circulation, also increases the risk of amputation. Another unwanted side effect of diabetes is neuropathy, which can cause burning or tingling in the legs and feet, loss of balance and deformities of the foot.

The good news is that most of these problems can be treated and reversed, as long as they are detected early and patients visit a medical professional for regular checkups.

“Education is very important,” said Dr. Blau. “There are certain rules that everyone with diabetes should follow.”

These rules include inspecting your feet daily. Look for areas that are irritated, sores, excess dryness or moisture between the toes. Dr. Blau said people with diabetes also should inspect their shoes before putting them on because they might not be able to feel potentially dangerous items such as rocks or nails. For the same reason, diabetics should never walk around barefoot.

“They might not notice a cut or scrape until they see a trail of blood on the carpet,” Dr. Blau pointed out.

“They should have their feet checked by a medical professional at least once a year to make sure they aren’t developing any problems,” she added.

Eyesight also is a major concern for diabetics, but, as is the case with feet, patients can take measures to protect their vision, according to ophthalmologist Dr. Jay Montgomery of Clemson Eye. He pointed out that there are three things those with diabetes can do to help save their vision: manage their diabetes; monitor their blood pressure; and lower their cholesterol level.

“The majority of people who control their blood sugar do well with their eyesight,” said Dr. Montgomery. “Those who don’t get their eyes checked at least annually could get into trouble.”

He added that with diabetics, retinopathy – ischemia of the retina – is the most common concern because lack of blood flow to the eye and retinal detachment both can be causes of blindness. Treatments are available that can help, however.

“Primarily we’re using injections into the eye that shut off the process of leakage of fluid and bleeding in the eye,” Dr. Montgomery said. “We can actually start reversing some of the retinopathy.” 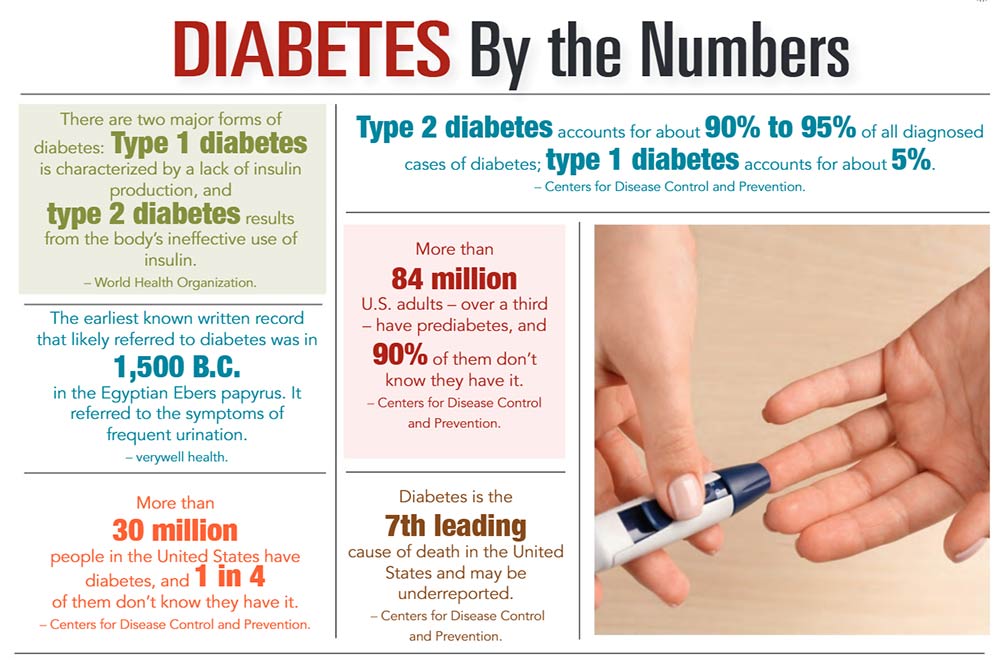