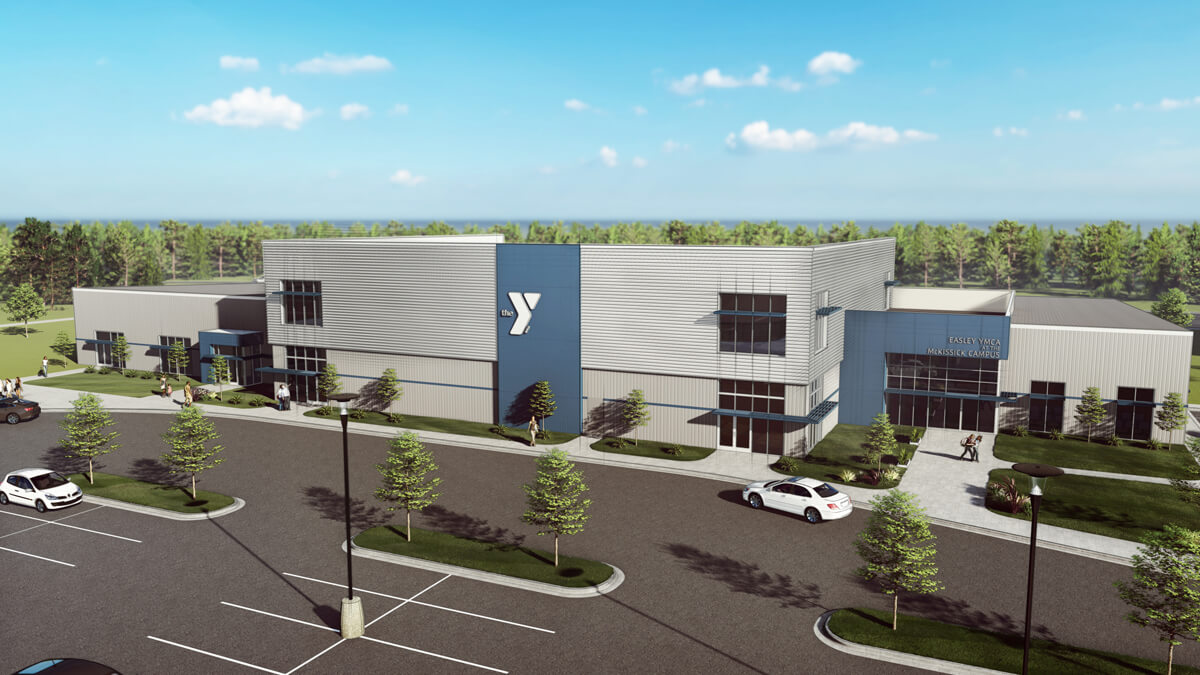 Shortly after the Easley YMCA turns 60 in 2022, it will have a second grand opening, this time with a new 57,000-square-foot facility built directly behind the original building on Burns Road.

The new $18 million YMCA will not only be bigger and serve more people than ever before, but, like its predecessor, it is expected to serve a growing Pickens County and the surrounding Upstate for many decades to come.

“The needs of our community in 2021 and beyond exceed the ability of our current building and its capacity to serve the Easley area,” said Sid Collins, president and CEO of the Easley, Pickens and Powdersville YMCA. “This YMCA will be unique in the layout, campus and services it provides. And we hope to break ground in either Q4 2021 or Q1 2022.”

Construction will last for 12 months or so, across two separate phases, with the new facility scheduled to open in either late 2022 or early 2023. Once finished, the new YMCA will offer all of the time-honored staples: swimming, aerobics, weight training and team sports for all ages.

The basketball gym will feature an elevated walking track, and an outdoor walking trail will run along the edge of the new building and circle around one of the two new adjacent athletic fields.

Other new items will include:

“It will also have a new name,” Collins said. “The new place will be called the Easley YMCA at the McKissick Campus, in honor of The McKissick Family Foundation giving our lead gift for this project.”

As for the existing Y structure, it will be renovated and converted to a senior center and a child development and training center.

“Easley needs a senior center – there is no viable alternative nearby,” Collins said. “And to complete all of these things in this project, we have launched a capital campaign to raise $3 million of the total cost.”

He added that the main portion of the cost will be financed primarily through a combination of private bank financing and fundraising and from a U.S. Department of Agriculture Rural Development loan.

More than half of the remaining $3 million has been pledged by community leaders, and Collins hopes area residents will step up with their own pledges because “they will play an important role in completing our effort to serve Easley.”

“This expansion and revitalization of the new YMCA branch will have tremendous, positive impact on the local community,” he said. “It will make possible the continuation of a decades-long heritage of service and improved physical, mental and spiritual health that will make Easley a better place to live.”

Of course, the new facility will have more people in its service area to consider. When the original Easley YMCA opened in 1962, Pickens County had a population of around 47,000 and growing. When the Easley YMCA at the McKissick Campus opens, Pickens County will be hovering around 128,000 people – and still growing as part of an Upstate boom.

When the new building reaches its 60th year in the early 2080s, it may again be time for another renovation to keep serving a bigger and still-expanding population.

“The Easley YMCA is one of the oldest institutions in the Easley area,” Collins said. “A new, one-of-a-kind, YMCA campus will reflect the greatness of the Easley community, and I believe this will be more impactful than we have envisioned.”