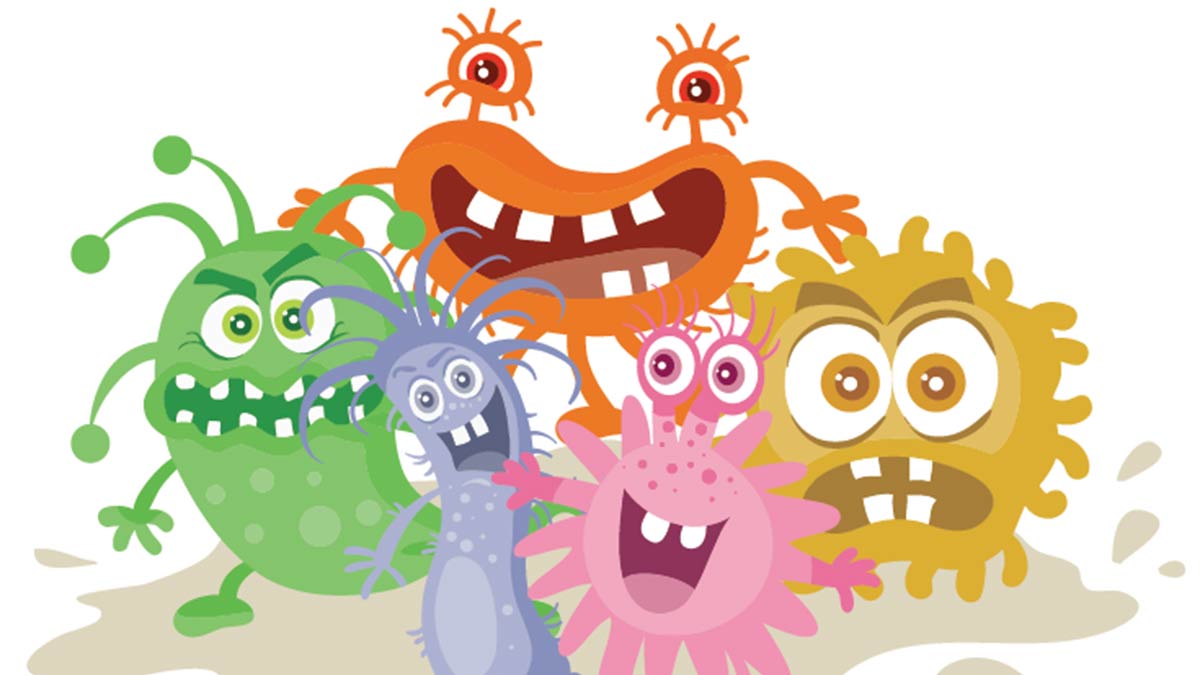 Microbes — colloquially “germs” — are the smallest form of life on earth, visible only under a microscope. Tiny but powerful, there are thousands of different bacterial species colonizing the average human body. Additionally, the ratio of human to bacterial cells is roughly 1-to-1.

The pathological fear of these microscopic beings is known as germophobia, or, more formally, bacillophobia. Regardless of what you call it, the battle against germs is futile. Unless you live in a sterile bubble void of any contact with the outside world, there is no escaping microbial life. But before you begin disinfecting all of your worldly possessions, read on.

Within seconds of birth, babies are covered in microbes from the first surface they touch. As an introduction to the natural world, a mother gifts her baby with a sampling of her microbiota. Some physicians even believe that more exposure to bacteria at a young age is beneficial. In fact, the “microbial diversity” theory asserts that contact with a wide variety of bacterial species is a key factor in strengthening the immune system.

And yet, there are bacteria that are hazardous to our health. Today, we know that some infectious diseases are caused by bacteria and viruses. However, this understanding, termed the “germ theory” of disease, is surprisingly new. Over 500 years of discoveries have contributed to our knowledge of microbes. The beginnings of the germ theory can be traced to the 1500s and the research of Italian physician Girolamo Fracastoro.

Shortly after the Black Death wiped out 25 million people across Europe, the late 1400s saw the continent’s first epidemic of syphilis. Fracastoro wondered how the disease could spread so quickly and infect so many people. He began to study all of the most devastating diseases: cholera, smallpox, leprosy and the plague. In 1546, Fracastoro made an extraordinary proposal by suggesting that illnesses were caused by very tiny, rapidly multiplying bodies. While many praised this novel idea, an influential Swiss physician shot it down. By the time Fracastoro was dead, so was his germ theory.

The belief in these tiny bodies was revived in 1674 when Antonie van Leeuwenhoek spotted tiny swimming “animacules” while toying with his new invention, the microscope. After scraping white residue from his teeth and viewing it under the lens, he was in awe of his discovery. Leeuwenhoek is now known as the “father of microbiology.”

In 1856, French chemist Louis Pasteur was approached by wine makers who were concerned that all of their wine was going sour. Pasteur looked at the tainted wine under a microscope and saw two different kinds of microorganisms: yeast and bacteria. He suggested heating the wine to kill the bacteria and prevent spoilage. This process became known as pasteurization and has since been used to increase the shelf life of many foods. Pasteur would go down in history for his remarkable breakthroughs in the prevention of many diseases, and as the hero of oenophiles everywhere.

Modern science continues to build upon the discoveries of the past. Dr. Laura Kasman, a microbiologist at the Medical University of South Carolina, touted the progress made in treating disease within the last 30 years.

“By learning about individual pathogens in detail, we have been able to develop faster, cheaper and more sensitive ways to detect them in the hospital,” she said.

Dr. Kasman has hopes for the future as well: “I would like to see the eradication of more vaccine preventable diseases from the planet, the way smallpox was driven to extinction in 1979. Polio is close to extinction. Measles and rubella need to be next.”

While we have eliminated some infectious diseases and many are kept at bay with drugs and vaccines, bacteria and viruses adapt. We will likely continue to face outbreaks of new diseases and variations of old ones. Though illness is prevalent during the winter months, Dr. Kasman affirmed that it’s not because of the cold temperatures.

What can you do to keep from getting sick? Sorry germaphobes, but there’s no way to totally wipe out all germs. However, The Centers for Disease Control offers some helpful advice for thwarting the spread of disease at work, at school and in the home. The best preventive measure for dodging influenza is to get vaccinated each season. It is also imperative to stay home if you are sick and to avoid close contact with others. When you cough, cover it up. Wash your hands frequently, and avoid touching your eyes, nose and mouth.

Finally, stress impairs your immunity, so avoid it if you can. You can live in harmony with your microbial counterparts. Ultimately, they outnumber you by the trillions.