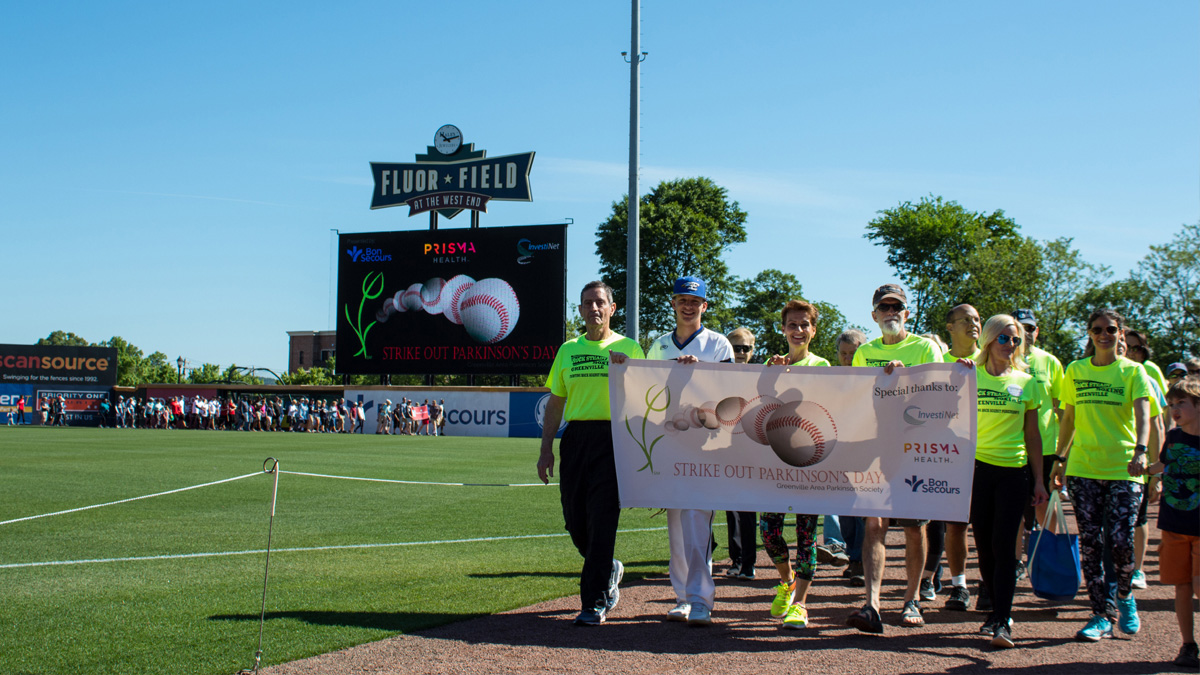 Every April, hundreds of people walk around Fluor Field in Greenville, but the reason has nothing to do with baseball.

Sure, April marks the beginning of the baseball season for the Greenville Drive, and, normally, the crowd of people would be in the stands, not on the field. But on April 25, the field has been designated as a place to “Strike Out Parkinson’s.” When that day arrives, you’ll see a parade of folks kick off the morning with a ceremonial walk in honor of friends and family members afflicted with a disease that affects more than 12,000 people in the Upstate alone.

Starting with about 50 attendees in 2012, the event has gained momentum in the community over the past eight years. In 2019, 500 people participated.

As Laryn Weaver, the executive director of the Greenville Area Parkinson Society, puts it, “We want our members to know we are dedicated to supporting them throughout their journey with Parkinson’s. People die with Parkinson’s, not from it.”

Weaver explained that Strike Out Parkinson’s is specifically for their members – to celebrate them and everything they have accomplished.

“It’s a great way for members to show their family and friends what they have been doing,” she said.

Rock Steady Boxing plays a major role in the celebration. The members and instructors give demonstrations during the event so that people can try it out, and as Weaver described, “it’s not easy!”

She said this event brings family members from far and wide to cheer on their loved one afflicted with the disease.

“This event is a great way to show support,” she explained.

Education is another important purpose of the event. Weaver explained that there will be plenty of resources on hand for people to peruse, covering subjects including physical therapy, volunteer opportunities, respite care information for caregivers and exercise programs such as Rock Steady Boxing and GAPS in Motion.

This is also a day to recognize top fundraisers, those who helped the organization raise more than $87,000 last year. Reaching the 2020 goal of $100,000 will help GAPS provide additional exercise classes and expand services to communities such as Anderson and Spartanburg counties. GAPS receives no state or federal funding. Weaver said the organization relies completely on organizational partners, individual donations and its events.

“We really want to offer more programs outside of Greenville,” she said. “There is a critical need to reach out to people in the surrounding areas. There are 12,000 in the Upstate that we know of who are diagnosed with Parkinson’s. What about the people who don’t know they have this disease? The ones that think they are just slowing down with age.”

Strike Out Parkinson’s is a free event; the ceremonial walk begins at 10 a.m.

“It is always a beautiful day to be outside in the spring, and it is also a beautiful way to show support and to empower those living with Parkinson’s,” Bonner concluded.

For more information on Strike Out Parkinson’s Day or GAPS, visit www.gapsonline.org or call 864-905-2574.