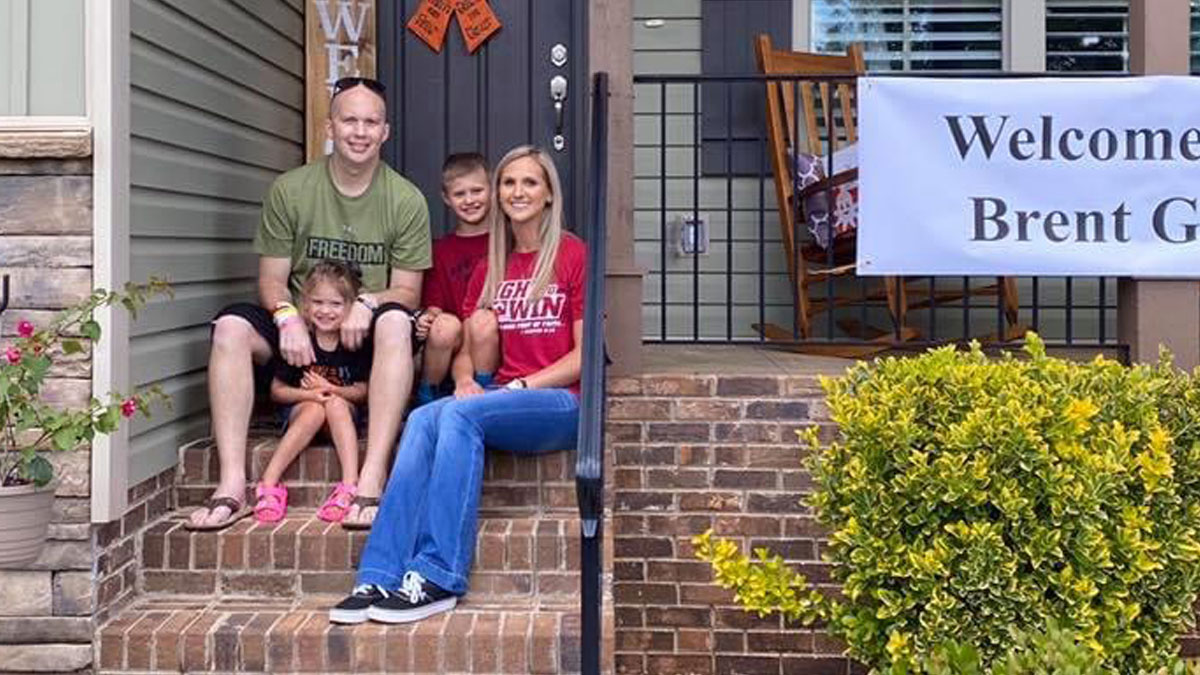 Brent Glover always considered himself a healthy guy with an active lifestyle. As a doting father, he spent time in the backyard or on the baseball field with his kids. He was even a proud U.S. Marine from 2003 until 2008. So when Brent started getting horrible headaches at the end of March — the kind that ruins your day and forces you to stay in bed — he initially didn’t think too much of it.

“Before this, I thought I was a healthy guy – 34 years old, never had any health problems or issues,” he noted. “As for my family medical background, I knew my dad’s mother passed away from cancer. That’s all I knew of in our family.”

The gruesome headaches were accompanied by dizziness and fatigue, and Brent’s wife, Courtney, felt it was time to step in after a week of watching her husband suffer. She suggested a doctor’s visit on Wednesday, April 1, when she found Brent struggling to stay upright during a dizzy spell in their kitchen. The couple arranged an appointment with the family physician.

“The next day, I went to my doctor and told him what was happening,” Brent recalled. “I had these red spots on my arms. He said, ‘Let me look at your legs.’ Both legs were covered in those red spots. I also had a bruise on my left leg and left hip that I couldn’t explain. That concerned him, as well. He ran EKG and blood tests and said he’d call with results.”

No one in the Glover family anticipated the doctor would call about the results at 3 a.m., with an urgent message to go to an ER immediately. But that’s exactly what happened during the wee hours on Friday – Brent’s phone rang multiple times. Because he sleeps with his ringer off, he didn’t hear it – and neither did Courtney. When Brent’s mother, his emergency contact, checked her voicemails at 5 a.m. and heard the doctor’s message, she leaped out of bed, drove to her son’s home and knocked at the door, the hour be damned. Interestingly, Eli Glover, Brent’s son, happened to be awake at that hour and let his grandparents inside.

Needless to say, things moved quickly once Brent’s parents relayed the doctor’s orders. But due to COVID-19 hospital restrictions, the trip to the emergency room at Spartanburg Regional was especially lonely for Brent.

“My oncologist has family ties, so he was able to get my parents and wife into the ER as I heard the news,” Brent said. “But as soon as we all heard the news, they had to go back outside.”

It turned out, much to everyone’s shock, that Brent had something called APL – Acute Promyelocytic Leukemia.

“Acute, meaning it hits suddenly and is aggressive,” Brent explained. “APL and AML – the other type of leukemia – go after two different kinds of blood cells. The doctors said that until we did a bone marrow biopsy, we wouldn’t know which type I had. And so Friday afternoon, April 3, they did the biopsy. I found out Saturday it was APL. If you have to have leukemia, it is the more treatable type.”

With that, Brent began his stay for three weeks and five days at Spartanburg Regional for his chemotherapy treatment. During that same time frame, the global crisis otherwise known as COVID-19 also was raging, and it meant that Brent had to spend almost four weeks without seeing his wife, children or parents. Until his discharge from the hospital, visits with family had to take place virtually. But, as an added personal element, the family could at least glimpse each other through hospital windows.

“I was fortunate to be on the first floor, so I could walk to the lobby, go to the window and see my wife and kids through the glass while we talked on the phone, like in jail,” Brent said.

Not seeing his loved ones was bad enough, but, according to Brent, the grueling rounds of chemo were the stuff that tries men’s souls.

“The first week-and-a-half, I was doing three types of chemotherapy at the same time. The two weeks after chemo were the roughest. The side effects kicked in all at one time. Nausea, gastric distress – eating made me so sick, they had to feed me through an IV. I did that for more than a week. Then they took me off the IV and gave me a liquid diet. I progressed quickly from liquid diet to normal diet,” he said.

Brent was able to go home on the last day of April and was declared to be in remission. As of this interview, he was gearing up for more chemotherapy.

“I start the second round of chemo. … and I’ll go five days a week for two weeks straight. Then two weeks off, then another round. Then two weeks off again, and my final round is for three days. Then four months off, then three more days. These are different types of chemo. While I’ve had the third type before, I haven’t had the second. But they say the hardest part is behind me,” he said, beaming with optimism.

His doctors agree that Brent is fortunate to still be young and healthy enough to battle APL so victoriously.

“I’m extremely blessed. I’m strong in my faith, and I strongly believe that the Lord has kept me here for some reason,” he said. “My family and I have to trust this is the plan. I’m doing good, though. I feel good.”