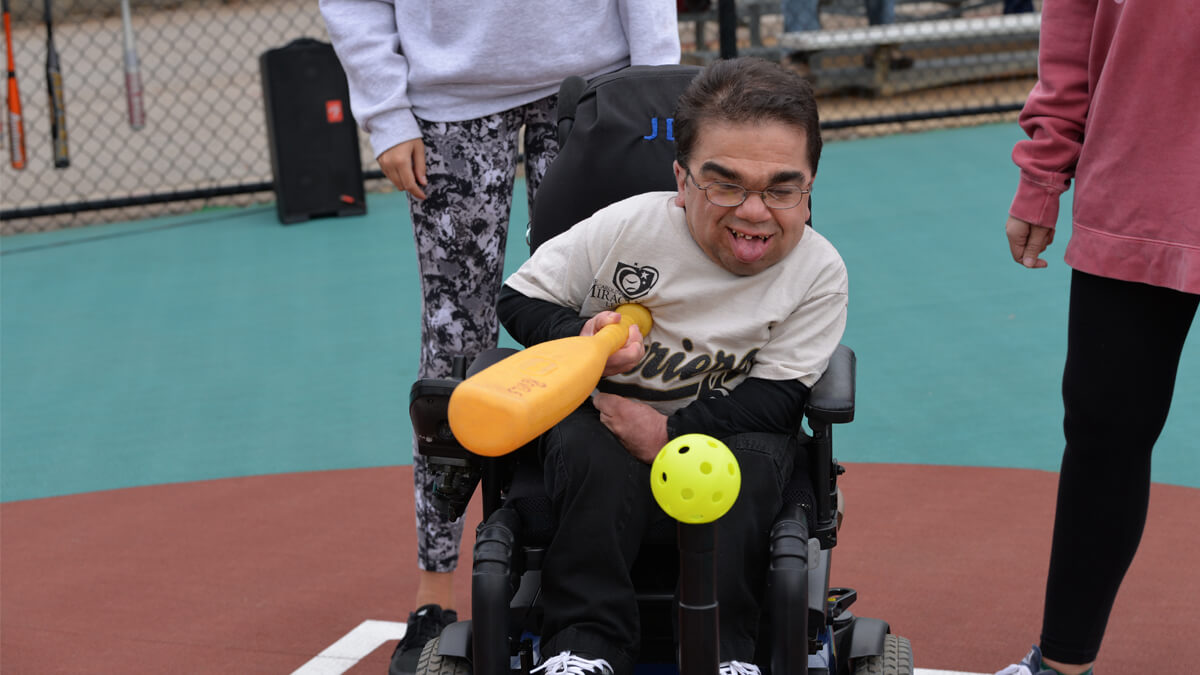 It was just a routine checkup for her 4-month-old son, Jonathan – or that’s what Pam Dean thought at first. But as she watched him examine her baby, she noticed the doctor was “spending a good amount of time feeling around Jonathan’s abdomen.” Feeling nervous as a new mother, Pam inquired whether everything seemed to be OK. The doctor’s reply was harrowing: “I believe your son has a fatal liver disease,” he said, explaining how he’d felt an enlarged liver and spleen inside the baby. He advised Pam to take Jonathan right away to the Greenwood Genetic Center, which she did.

At the Greenwood Genetic Center, the infant experienced X-rays, skin samples and blood samples, while his parents answered questions about his overall health and development. Soon, Dr. Roger E. Stevenson — “one of the best doctors we ever had,” according to Pam — diagnosed Jonathan with mucopolysaccharidosis type 1, commonly known as MPS 1, or Hurler syndrome. Though the disease is often fatal, Dr. Stevenson was remarkably optimistic and offered a solution to the family: Send young Jonathan to the University of Minnesota, where a Dr. William Krivit was performing bone marrow transplants on MPS 1 patients — medically groundbreaking for the year 1986.

Despite the promise of a solution for her child, Pam admitted she “fell completely apart at the news.”

“I was devastated. My husband, Bob, and I had waited nine years to have our first child. He had his own business, and we’d built a home — we had a plan, and this was not part of it. I was 29 when I had Jonathan, but I would say, looking back, that I was very mature. We were focused and had work ethic and maturity, and all of that helped us as we entered unchartered territory.”

The Dean family packed their suitcases for a lengthy stay of three months, which, in those days, was about the time to expect for a bone marrow transplant. Pam and Bob journeyed together to Minnesota, and Pam was grateful for her husband’s calm and soft-spoken demeanor, which kept her grounded.

“We accomplished everything together,” she said.

To receive the bone marrow transplant, Jonathan would need to undergo chemotherapy and radiation so his immune system would not retaliate and would accept the bone marrow. Despite preparation, however, the first transplant did not go well — Jonathan’s body rejected the blood, and his own marrow grew back. Heartbroken, the Deans took their baby home to recover and summoned their strength to try a second time. For the second transplant, Jonathan’s late grandfather, Wally Dean, donated his own marrow, which the family believes made all the difference.

“They had the same blood type, and, when Jonathan’s body accepted the marrow, his body was rebuilt: His blood cells, platelets and all that got stronger. Wally was a great man. He was so happy to be the solution,” Pam said, beaming.

For the Dean family, a strict quarantine came about more than 30 years prior to COVID-19. Jonathan’s weakened immune system meant absolutely no visitors or outings — not even to the grocery store or church, Pam explained. Even physical therapists visiting their home to build up Jonathan’s strength had to change into freshly sanitized clothing upon arrival.

As Jonathan grew older, he became a happy child who loved school and enjoyed good experiences. In 1998, his teachers suggested he might be ready for a motorized wheelchair — he was, and he still uses one today. Meanwhile, Pam had begun serving on the Disabilities and Special Needs Board of Spartanburg County, savoring the chance to give back to a cause she held close to her heart. One day, a staff member brought in a video from Conyers, Georgia, featuring a special rubber baseball field for kids with special needs.

“It was awesome,” Pam exclaimed. “Our board looked at it and decided we could do it, too.”

With that revelation, a committee — which Pam became part of — started working on the new field, partnering with Spartanburg County Parks and Recreation to plan its location and raise funds. From concept to fruition, the field took about six years – then, of course, they needed a community baseball league to host games and foster enthusiasm. Today, the Carolina Miracle League, led with passion by Pam as executive director, continues to be the only sports league for players with special needs in Spartanburg.

Jonathan, now in his mid-30s, enjoys participating in the league and venturing to the office with his mother. His younger sister, Elizabeth, lives in Maryland and “is very protective and great for his development.” Jonathan’s parents take turns teaching him new things and spending quality time with their son in the post-COVID era; before the pandemic, Jonathan attended a daytime program, which he enjoyed, but, since he’s unable to receive a vaccine, he’s now perfectly content to spend time with his parents — and play baseball, of course.

“When Jonathan Dean hit that ball for the first time, it was worth every bit of trouble and obstacle to have this field and this league,” Pam said. “Without Jonathan, none of this would have happened. Now, I have the greatest job – I see it on these kids’ faces how it was worth it, and how playing baseball is their greatest joy.”