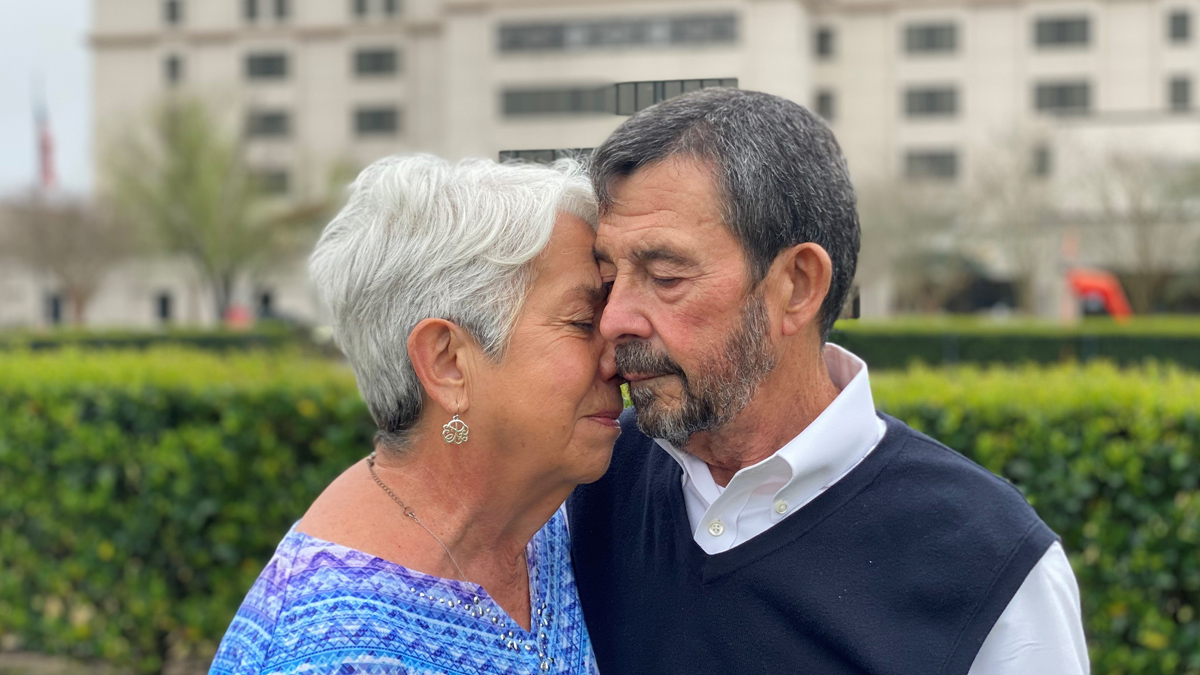 It was an atypical day from the beginning. For one thing, Pete Bazzle and his wife, Penny, usually do everything together — but that day, Pete had a doctor’s appointment in Walterboro, while Penny was heading to lunch with her cousin in Summerville. After his doctor’s visit concluded, Pete was driving home and got as far as Grover, an unincorporated part of Dorchester county, when he was suddenly hit head-on by a car he didn’t even see coming.

“I didn’t see the car, but I felt like something was wrong – like something bad was about to happen,” he shared. “Then I saw a flash of light, like sunlight, and everything went black.”

Pete regained consciousness briefly while the paramedics were on the scene, just long enough to ask if they could get him out of the car and to tell them his wife was in Summerville. He isn’t sure how long he was awake before he passed out again – the medevac helicopter came and took him to Trident Hospital, where he would not wake up again for a while. Upon landing, Pete’s daughter — who drove Penny to the hospital and had just arrived — ran toward the helicopter, asking frantically whether Pete Bazzle happened to be onboard. The next 24 hours were “a blur,” said Penny, and doctors were uncertain whether Pete would make it.

“The doctor came out and said to me, ‘it would be easier to tell you what is not broken rather than what is broken,’” she recalled. “They said it was iffy whether he would live or not. He had broken bones from his neck to his toes. Sixteen broken ribs, broken neck, collarbone, left leg, right leg – bruised heart, collapsed lung, torn intestine, right foot damaged, bone sticking out …”

The next morning, doctors told Penny that her husband had survived the night. But Pete still had a long journey ahead, starting with two-and-a-half weeks in the intensive care unit. Details about the accident were slowly surfacing; bystanders had seen what happened. The Bazzles learned a felon had allegedly kidnapped a woman in Florida and dropped her off in Georgia, then, while heading south on Highway 15 in Dorchester County, lost control of the vehicle and veered into the left lane, hitting Pete in the process. Both cars had flipped upside down and caught fire.

“Pete was covered in gasoline when the paramedics got him out,” Penny noted.

A retired nurse herself, Penny was amazed and relieved at the level of care her husband received at Trident Hospital. She called his care team “personal and compassionate,” praising one nurse in particular, Stephanie, who “went above and beyond to comfort Pete.”

“He was meant to be at Trident,” she mused. “Our daughter lives just a few miles away, and I was able to stay with her for four months. And I didn’t have to battle traffic.”

Yes, it took four months from the day of the wreck — April 15, 2021 — to when Pete finally finished his rehabilitation in August. After a month in the hospital, Pete was released to start rehab in May. He was already doing very mild physical therapy, which he’d started at Trident, but he was far from out of the woods. He’d just begun eating again but still could not swallow on his own. Though he had a neck brace, pins in his right foot and braces on both legs, the care team found ways to start physical therapy in the hospital, Penny explained, to “prepare his trunk muscles and enhance his strength for when he could get out of bed again.”

The months of rehab were quite successful. Pete and Penny both maintain that their devotion to fitness and healthy living undoubtedly increased Pete’s rate of recovery. Prior to the wreck, the couple walked every day, and Pete regularly engaged in push-ups and weightlifting. After he finished the rehab program, he enjoyed a special workout opportunity with his physician, Dr. Malcolm Gottlich, where both men did 10 push-ups, and Rod Whiting, vice president of public relations and communications for the hospital, filmed the event. Pete ended up doing 12 push-ups, much to everyone’s amazement.

“It felt so great I couldn’t stop,” he declared.

As of press time, Pete is nearly back to his old self: “I started with the wheelchair, then a walker, then a cane and now I can walk on my own,” he reported. “I still have a limp, and I have pain sometimes, but I can cut the grass or do whatever I want to do.”

“They call him ‘the miracle man’ now around St. George,” Penny added, beaming. “They mean it in terms of faith and tenacity. Pete was never angry; he never complained. He even forgave the guy who hit him.”

“The community in this area has been so loving and supportive,” she added. “We’ve had people send cards and tell us they’re inspired. They tell me they prayed for us, and they are so happy to see Pete. Our extended family, church family, the community – even people we didn’t know.”

As devoted members of Bethel United Methodist in Harleyville, the couple is proud to share their story and assure everyone “miracles happen every day.” Between the two of them, Pete and Penny have five children, 14 grandchildren and three great-grandchildren, and Penny noted that “the children are amazed, and the story has strengthened the faith of their family and friends.”

They’ve been happy to return to regular worship and events following Pete’s recovery, including a Shrine Christmas party this past December.

“Pete slow-danced with me,” Penny recalled with a smile. “And people clapped for us. I cried.”