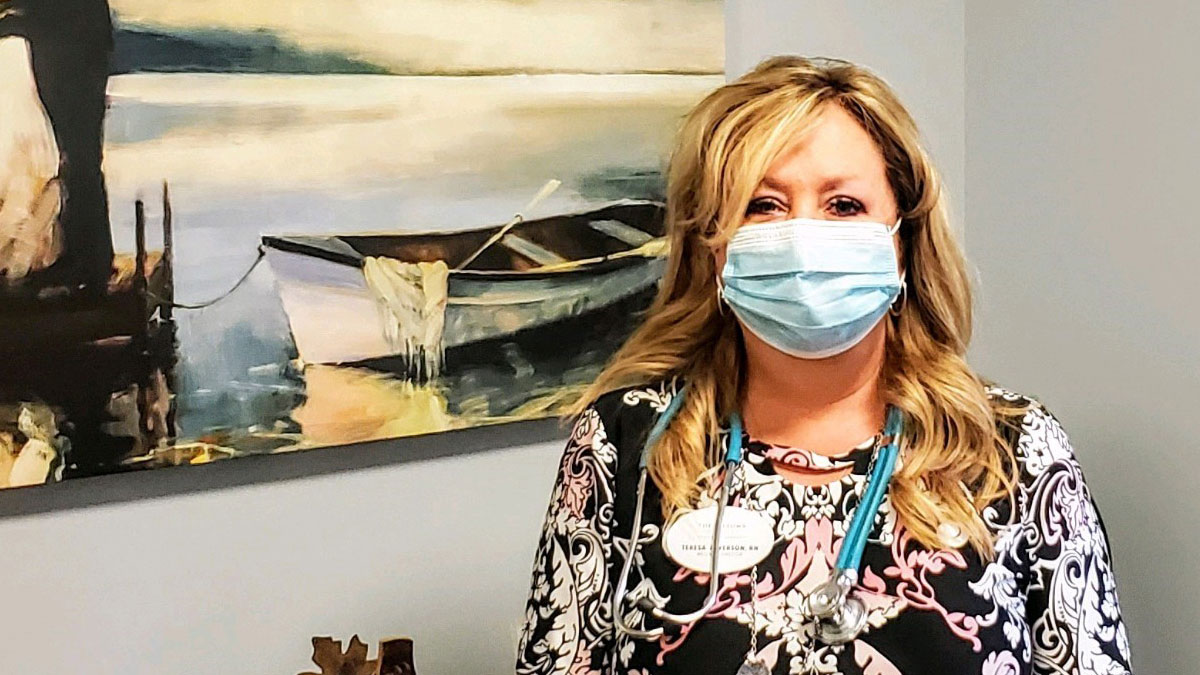 A trusted institution in the upstate since the 1990s, The Willows of Easley, a Grace Management Community, is a senior living community families can count on. After all, it started as a family business. The brainchild of the Kay family and a friend, Billy Powers – they all realized at the time that no assisted living facility of its kind existed to serve the community – The Willows opened its doors in 1997 to sustainable success. The facility added an independent living component in 2004 and has maintained a sterling reputation for decades, thanks to renovated living quarters, a fun-filled environment for the residents and a compassionate staff.

One member of The Willows team has a particularly intriguing back story; she transitioned her career from accounting and administration. Recently earning her master’s in nursing, Teresa Alverson is a fan favorite and was “an incredible fit from the start,” according to Executive Director Laura Spearman.

“When we met Teresa, we just knew,” Spearman exclaimed. “Her resume came across at 10:30 at night. I immediately reviewed and replied back, offering an interview. We’d been searching and searching for just the right fit to complete our team. Since then, in the last 18 months that she’s been here, we’ve really fallen into a groove.”

Alverson said her interest in becoming a health care professional began when her sister was diagnosed with diabetes. After “a lot of years in accounting and office management,” she found herself newly inspired by the nurses who cared for her sister before and after a kidney transplant. She decided to go back and get a nursing degree in 2011. Now, nine years of school later, Alverson knows she made the correct decision.

“My sister’s nurses made an amazing impact on me,” she said.

Her first nursing job was at Prisma Health in Greenville, but Alverson later realized she wanted to be a little closer to home. When the position with The Willows opened, she decided to apply. She feels like the new professional relationship was “meant to be.”

Spearman agreed, noting that finding the right person to fill a role consists of more than seeking a skill set.

“When you’re building a team of professionals, you look for people who are emotionally invested,” Spearman said.

“I never questioned Teresa’s integrity or work ethic. I trust her completely. We have a high standard here – our residents deserve that. Teresa and I are on the same page.”

In the last year-and-a-half, Alverson has connected with each resident at The Willows on a personal level. There are about 48 residents in assisted living and 53 in independent living, and Alverson knows them all by name – as well as their families, friends and interests. Though she might not see residents in a medical capacity, she enjoys running into them regularly during community activities or just “in the hallway.”

“I think the thing I find most fulfilling is making a difference in their lives. Being one on one with them. Providing a smile one day and nursing care another – but providing it all with empathy,” she said. “I was told during my interview that The Willows would end up feeling like home to me. It was a true statement.”

To find out more about The Willows of Easley – where it’s not like home; it is home — visit www.thewillowsofeasley.com.