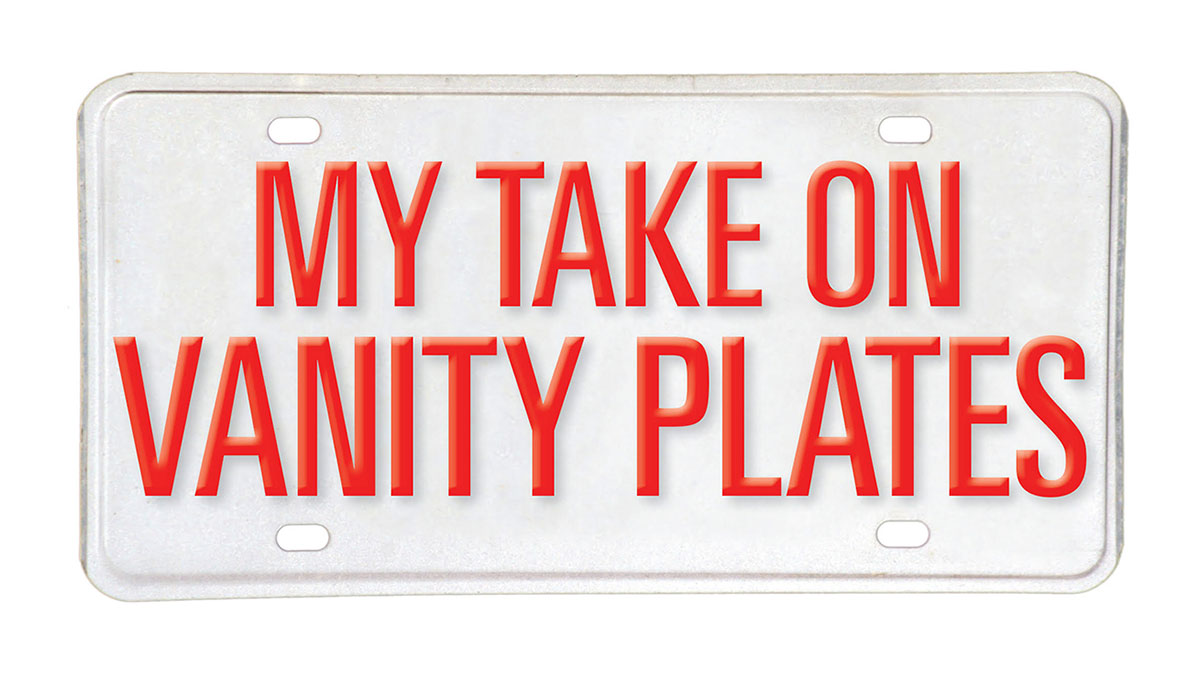 There are some things you see all the time but never pay much attention to – unless you’re stuck in a traffic jam. (An occurrence much more frequent in the Lowcountry these days than, say, 10, five or even two years ago.) Those things are license plates, specifically “vanity” plates.

They can be clever, witty or even mildly annoying. They’re called “vanity” because their purpose is to single out the driver of the vehicle, to highlight some aspect of his or her life, perhaps to advertise their profession. Whatever the message, the underlying reason for them all is, indeed, vanity – shouting, “Look at me. Here’s who I am. I’m not the same as all the rest. I’m special!”

Some are proudly possessive, as in “BOBS BEEMER.” Some are vocational as in “IIII” for an optician. (It took me a while to figure out that meant “four eyes.”) Some are aggressively personal, as in “VRYQT.” They’re never really in your face, unless, of course, you’re stuck in that traffic jam and the cellphone you’ve been texting on just died.

Once I stopped behind a Lexus with the plate “2SXY4U.” My advice, if you happen to spot that one, is don’t pull up alongside the car, blow your horn, wave wildly and try to toss a paper napkin with your phone number on it into the driver’s open window. Trust me – it won’t end well for you.

All of which leads me to a message I got a while ago from a former colleague – a noted entertainment reporter – bemoaning the production of the very last Volkswagen Beetle.
I wrote him back, agreeing that this was an automotive milestone. I also told him about the old VW I had seen in Los Angeles years ago with the vanity plate “SAMSA.”

It had taken me brain-wracking months to figure out what the hell that meant, until I had a revelation. I finally knew the answer. So I asked him if he could figure it out.

Weeks later, after a fusillade of begging, pleading, beseeching emails, I have remained firm in my resolve not to let him off the hook. He’ll have to figure it out himself or simply suffer with the knowledge that I know something he doesn’t.

So that’s what this rant is about: vanity plates in general, but especially those that try to turn us into amateur cryptographers until we can decipher them.

You’ve probably already figured out what SAMSA meant on the license plate of that old VW. If by chance you haven’t, I’ll give you the clue I didn’t give my friend. Think back to the modern lit classes you took in college. Pull up your memories of that early 20th century writer Franz Kafka.

One of his most memorable tales, “Metamorphosis,” relates how a man wakes up one morning to find he has been turned into a giant insect.
Kafka’s protagonist became a hexapod invertebrate, something you and I might call a bug. And what is a classic Volkswagen Beetle called but a bug. Did I mention that Kafka’s character was named Gregor SAMSA?
That’s what I get for driving around a college campus.

And that’s my take on vanity plates.