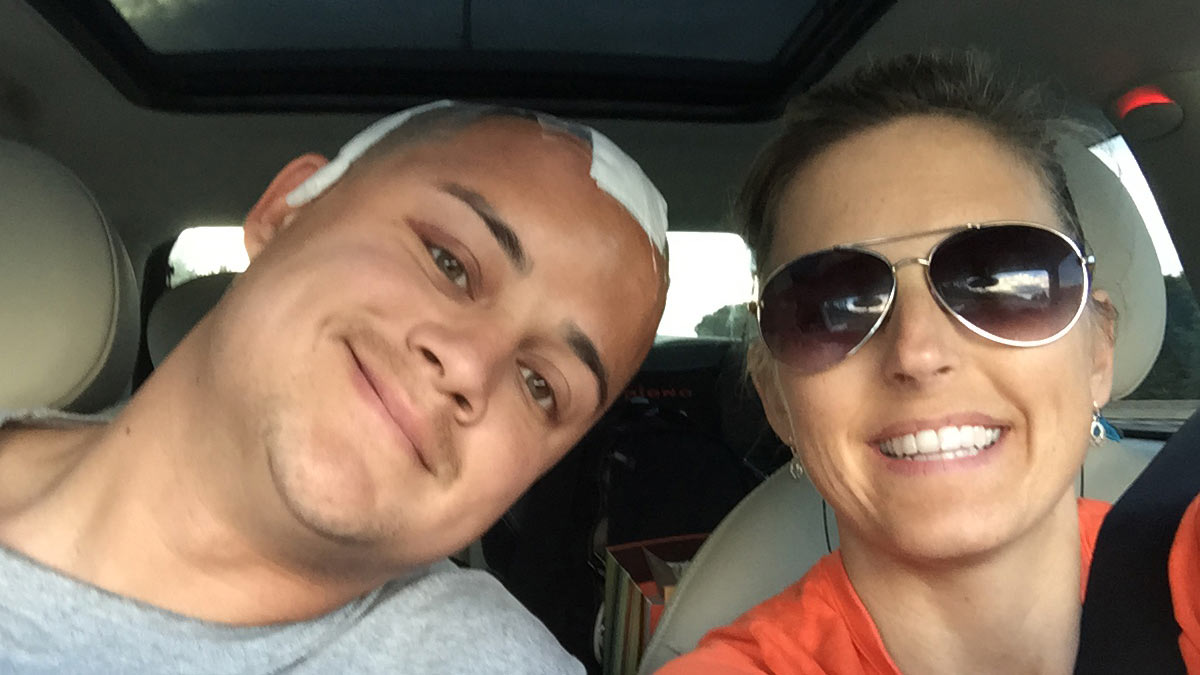 Once upon a time, Terry Meng assumed he would always be healthy. The Spartanburg County native played baseball and football throughout his younger years, served in the U.S. Air Force and had no major medical history on either side of his family. Sure, he suffered headaches every now and then, but, for the most part, Terry enjoyed being “fit, athletic and in good health.”

In spring 2015, however, everything changed. It all started when Terry was working for a trucking company and getting a new warehouse underway when, the weekend before an important presentation, he came down with a “debilitating” migraine headache. After taking some migraine medication, Terry slept from Saturday into Sunday — then felt well enough on Sunday morning to assume he could continue prepping for Monday’s presentation. By noon, however, the migraine had returned, and Terry knew it was best to go to the emergency department.

“There was a D.O. on call, and that doctor did not want to just treat me for the headache — he wanted me to get a CT scan,” Terry remembered. “I said no at first. I knew that if I did it, I wouldn’t be able to do the work presentation.”

When Terry’s fiancee, Jami, arrived at the hospital, the doctor told her the same thing: He wanted Terry to get scanned. Finally, the couple agreed to heed the advice, and, sure enough, the scan showed a spot to be concerned about, so Terry was asked to stay in the hospital overnight. An MRI on Monday confirmed the frightening news that Terry had a brain tumor. A few months later, the biopsy showed the tumor to be a malignant oligoden droglioma. The diagnosis shocked the couple.

“When you hear something like that, your whole world feels crazy,” Terry said. “At the time, I was getting married and had a
daughter on the way.”

Then the report became progressively grimmer: Doctors in Spartanburg did not think the tumor was operable. Terry would have no choice but to try chemotherapy and hope for the best.

That’s when Jami stepped in. A proponent of natural and holistic medicine, she decided to look into alternative treatments. “Jami immediately had spirit,” Terry commented. “She had motivation and was ready to fight.”

Terry’s case was soon evaluated and accepted by the Duke University Hospital. Unlike the physicians in Spartanburg, the
team at Duke said successful removal of the tumor was a distinct possibility, so Terry and Jami, buoyed by hope, packed their bags and headed for the Research Triangle.

“They put me to sleep, cut the flesh and then woke me back up for the operation,” Terry shared. “The assistant would face me and ask me questions to see which part of my brain was functioning, so the surgeon — Dr. Allan H. Friedman — would know what to remove and what not to remove. It was wild.”

Though a sliver of the tumor was left behind — removing it would have left Terry paralyzed — the surgery was ultimately deemed successful. In addition to Dr. Friedman, Terry and Jami feel indebted to one compassionate neuro-oncologist in particular: the late Dr. Dina Randazzo. A holistic practitioner whose interest in medicine began when her own father passed away from a brain tumor, Dr. Randazzo supported the Mengs on their journey and respected their goals not to use radiation and chemotherapy in the fight.

Today, Terry still has not undergone chemo or radiation. Instead, he is monitored carefully with MRIs — initially, they were every 12 weeks and now not as often — and sticks to a diet without sugar and carbs. He also drinks only alkaline water.

“Cancer grows in an acidic environment,” he explained. Both Terry and Jami are certain that the ER doctor’s insistence of Terry getting scanned at the hospital in 2015 was divine intervention – in fact, Terry had just converted to Christianity in February 2015, two months before his day in the ER. The couple also agreed that Terry’s ad mission to Duke and the support of Dr. Randazzo were integral to the success of the journey as well.

“Probably the most shocking thing was how we found the tumor — because of the D.O. wanting to do the CT scan,” Jami said. “That was such a godsend. And then when we got to Duke, Dr. Randazzo was also a D.O., and it comforted us to know she would be more open-minded about what we wanted.”

Does Terry feel like his old self again now? He’s actually better than ever, according to Jami. Because the surgery dealt with the temporal lobe — which affects people differently — Terry experienced changes to his perception and emotions. Jami admitted her husband had “zero empathy” right after the surgery, which is to be expected, but, as you read this, Terry’s emotional intelligence is sharper than ever, enhancing his roles as a father, husband and friend.

“It’s … like those pathways all reconnected — like a bridge was washed out when the tissue was removed, but then everything regrew and was rerouted,” Jami mused. “And it has made him more conscious about what he says and so much more caring. It is definitely wonderful.