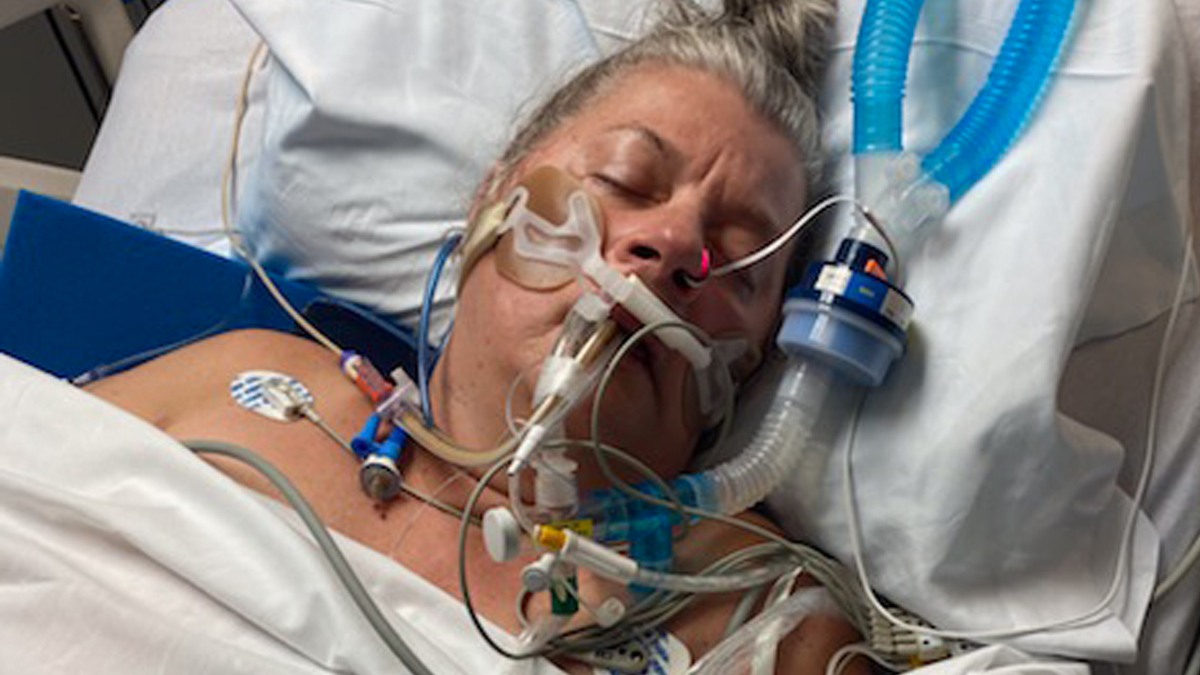 It started out as any typical Sunday afternoon for the Anderson family – everything seemed peaceful, and Jimmy was getting ready to leave the house to shop for the week’s groceries. Suddenly, he heard his wife’s voice call him from the kitchen. It wasn’t a loud call, he said, but their home is small, and it sounded clear. When he headed into the kitchen, he was shocked to find Lisa leaning over the counter, then promptly collapsing onto the floor. Jimmy rolled his wife over and discovered she was completely unconscious – without breathing or a pulse.

“I didn’t panic though,” he remembered. “I thought she had passed out, then I thought maybe she’d had a heart attack.”

Hannah Grace, the Andersons’ daughter, saw what was happening and, without hesitation, went to the next door neighbor’s house and knocked after her dad asked her to go get help. By the time the emergency staff reached the Anderson home, the neighbor, too, had checked for Lisa’s pulse and found nothing. It took about 17 minutes on the CPR machine to get Lisa’s heart beating again. Jimmy departed for the hospital with his still-unconscious wife, leaving Hannah Grace with Lisa’s cousin. Even at the hospital, it wasn’t immediately apparent what had happened. Lisa’s lungs, heart and other organs were checked, and doctors decided to freeze her body for 24 hours, a technique that can “reset” the body and prevent brain damage or death.

“It’s about a five- or six-day process of warming up again after the freezing, but it will reduce the chance of trauma to the brain,” Jimmy explained.

In the critical care unit, Lisa gradually came back to life, just in time for her 60th birthday. It happened in stages, according to the couple – first she turned her head to follow her son’s singing and guitar-strumming around the hospital room, eyelids still closed. Finally, she opened her eyes on her birthday, much to the jubilance of friends, relatives and church members who were all following along on social media. She was not walking or talking yet, and Lisa claims she has no memory of her time in the hospital, including the time following the CCU, when she was moved to the heart unit.

Over the coming weeks, Lisa continued recovering slowly but surely, mouthing the words to her favorite songs from decades past and also to familiar prayers that her husband recited. She departed Spartanburg Regional Hospital after one month and checked into the Roger C. Peace Rehabilitation Hospital, where the compassionate nurses helped her make incredible progress on her recall, despite initially testing as a dementia patient.

The final word on what had happened to Lisa? Sudden cardiac arrest – with absolutely no warning signs. It was “out of the blue,” in Jimmy’s words.

“She had no prior issues at all,” he said. “The electrical part of her heart had just stopped working. Cardiac arrest is different from a heart attack, where there’s a blockage of some sort.”

When Lisa initially came home, she “wasn’t able to do much,” she said. Meanwhile, Hannah Grace, who has autism spectrum disorder, was understandably a bit nervous about leaving her cousin’s house, where she’d contently spent the month, and coming home to be around her mother. Fortunately, Hannah Grace soon realized everything was going to be fine and started helping Lisa around the house, fetching snacks and beverages and “whatever was needed.” Both Jimmy and Lisa praised their 27-year-old daughter for handling the entire situation well – including approaching the neighbor that first day.

“She is autistic, and she has a chromosome deletion on her ninth chromosome,” they shared. “With autistic individuals, if things aren’t part of their usual routine, it bothers them. Hannah Grace’s world was completely turned upside down, yet she was a champ!”

“She can be very independent,” Lisa added, smiling. “She drives a golf cart. She loves shopping for Michael Kors and Kate Spade purses, and she loves to sing, go to church and also attend plays. Jimmy teaches at Dorman High School, and we’ve got her tickets for the next socially distanced play.”

As of press time, Lisa had been back at work for four happy weeks at the Family Connection of South Carolina, a nonprofit that helps parents with special needs children find support through others with similar stories. Lisa has been with the organization for 25 years and truly loves the work – in fact, friends and relatives have suggested that Lisa fulfills her life purpose in her role.

“The Lord eventually healed my body,” she said, with obvious reverence. “Only one in 100 survives a cardiac arrest – and most survivors end up having some kind of physical or mental deficit. The doctors even called this a miracle.”